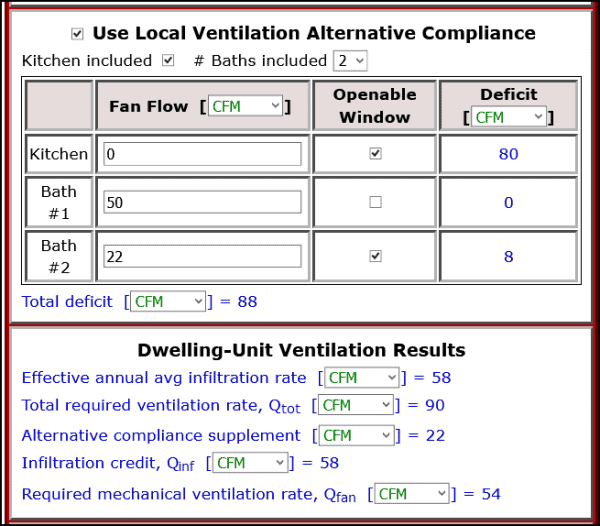 The objective of the alternative compliance path, first introduced to the ASHRAE 62.2 standard in 2010, is to reduce the cost of installing mechanical ventilation in existing dwellings while retaining acceptable indoor air quality.

A Bit of WAP History

We have heard that the introduction of the alternative compliance path for existing dwellings was the major new feature of the ASHRAE 62.2-2010 standard that prompted the management of the Weatherization Assistance Program (WAP) at the Department of Energy to require the use of ASHRAE 62.2 for all WAP jobs. As a result, the ventilation standard became a significant health and safety measure beginning with the 2012 program year.

The alternative compliance path allows much more flexibility for local mechanical ventilation, but requires a compensating increase in dwelling-unit ventilation:

How the Alternative Compliance Path Works 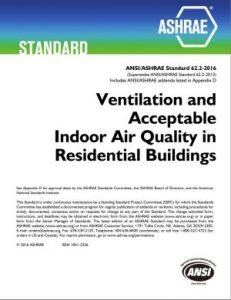 It is worth noting that if a compliant kitchen range hood and a new exhaust fan were added in bathroom #2, eliminating all deficits, the dwelling-unit ventilation requirement for this example would drop by 22 CFM, to 32 CFM.

Leaving existing fans in place or not installing a local exhaust fan where there isn’t one seems like a good option because it saves money. However, the best practice is to replace existing fans and install fans where there are none. The guidelines below are intended to ensure that you use the RED Calc ASHRAE 62.2 tools correctly and that you appraise existing fans with care.

By continuing to use the site, you agree to the use of cookies. more information